This article was kindly submitted by Aviv Bershadsky,

Dear friends, I am happy to announce that Dima Jitovetsky has attested to the completion of OT I!

Now, you may ask me, what is so special about this?

First of all, Dima is the first to complete OT I in Israel. Prior to 2012, Dima and other Scientologists in Israel had to travel to distant locations such as Denmark, England, US and even Australia to do their OT Levels. Now Dima and his friends can do those levels in Israel at a saving of 10,000’s of dollars and months of time.

But that is not the entire point! There is a much more important matter of Standard Tech. Dima is one of the first beings in the world to do the proper OT I, as written by Ron. This, after about 30 years of “God knows who” invented “New OT I” as delivered in the Church. This point needs to be clarified further.

In 2010, I travelled all the way from Israel to Australia to do my OT Levels. The reason I travelled that far was the price of OT Levels in Australia was a bit lower then in the rest of the world.  I have to admit that the staff at AOSH ANZO was very nice and willing to help. It is not their fault that they are being ruled by a psychotic dictator who wants to change everything around, except for himself.

At that time, 2010, I had no clue about the “Independent” field. Actually, I was kind of a Kool-Aid drinker myself. Being an experienced auditor, I got through my Solo I and Solo II courses pretty fast. Then, a little hassle on ‘Eligibility’ that fortunately for me ended fast. And here I was in the New OT I courseroom, ready and excited to read and practice some real OT stuff! I was thrilled to get new OT data I never read before and do some super-duper OT processes that I had been dreaming of for so long.

Here I felt the first disappointment, which I swallowed that moment. The second one came when I opened the super-secret platens. Oh my God! Those were just Grade I processes on problems, run on some specially chosen terminals. No OT Processes, but LOWER LEVELS PROCESSES. To be honest, I did get some wins on them, but I still had the feeling that something was wrong with this “New OT I”.

Later, in 2012, when I got out into the “Indie” field (and my Kool-Aid drinker level got much lower), we procured the original OT I materials and everything became clear and well understood. The “New” OT I turned out to be a fake! How do I know? That’s very simple, the original OT I is handwritten by LRH!

Just in case you doubt me, take a look: 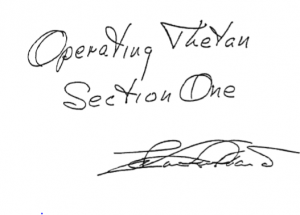 These materials were never shown to me at the Church. Further, I did some research of my own. I interviewed my friends, guys who did the OT levels at the church. They all remembered faintly doing the same action I did, with mediocre wins, no “OT Level”. But then I talked to our friend, Yossi Charny, who visited Dror Center a few weeks ago. Yossi clearly remembers doing OT I at AOLA in 1983. He said, “Sure, it was LRH handwritten”, and he described the processes to me. Exactly the same as what we deliver at Dror! Further, he laughed, and said he had arguments over this with his wife Ronit. She did her OT levels in the 1990’s in the Church, but described to him the same “Grade I” processes we all did at the Church. (The Charny’s story is here.)

When I was supervising Dima on original OT I here at Dror, I saw him beaming after every session he did. His cognitions were really OT cognitions and he was ready to continue this level forever, but unfortunately he hit the EP of OT I which is “Extroverts a being and brings about an awareness of himself as a thetan in relation to others and the physical universe” (from: “Scientology 0-8”, edition of 1972). The processes of OT I gradually brought him to this cognition.

Now, how can the Problems Processes of New Fake OT I bring somebody to this cognition? Well, they cannot!

Let’s read Dima Jitovetsky’s success story at the completion of OT I:

“In this process I got lots of theta and I felt myself as a thetan, not as a body. These processes are relatively simple but extremely powerful. I enjoyed every session I got. Sorry, every session I gave to myselfJ

“A bit pity that it’s over, but I have to move on!

“While on the level, I also understood who my real friends are. They are Aviv, Tami, Dani, Dima, Moti, Carmela and Ron Hubbard. Thank you very much!”

So, dear friends, we at Dror Center are fully set up to get you all the way to OT. We deliver what Ron promised, the real OT Levels! Come and have your portion of theta here in the Land of Milk and Honey.

Much, Much Love, Aviv