Ortega’s post mentions Aslan’s visit to Israel and guesses that Aslan interviewed Dani Lemberger and his group at Dror Center. Ortega was right about this one, Reza Aslan did visit Dror Center on 21 November 2015. Here’s some pic’s of it: 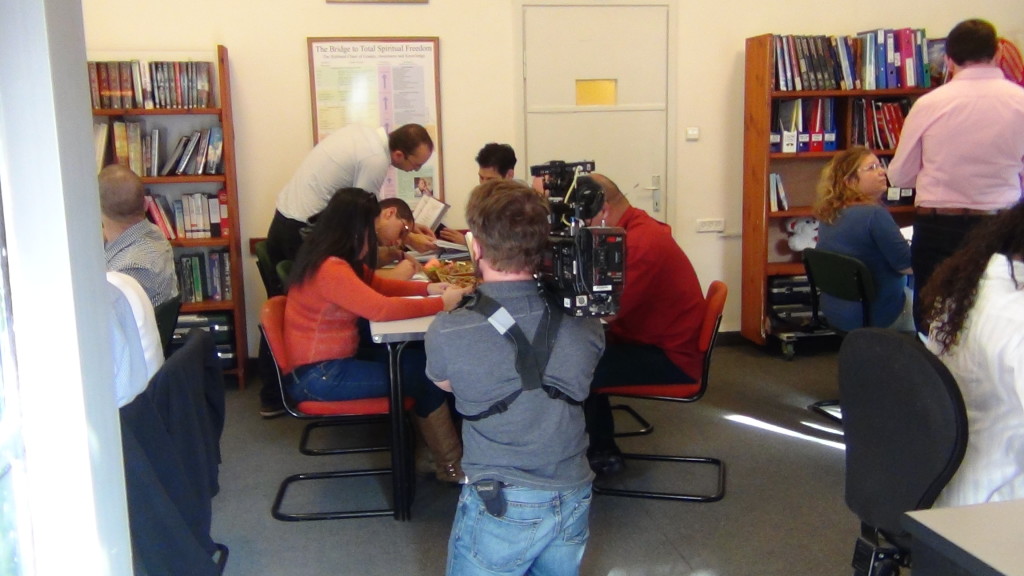 Dani Lemberger has featured before on Ortega’s blog. Immediately after Dani & Tami were expelled by the Church of Scientology, on 28th June, 2012, Ortega met Dani at Newark Airport and published a lengthy interview on his Village Voice blog on 6th July, 2012.

However, Ortega’s post against CNN and Reza Aslan drew a sharp response from Dani Lemberger. Dani posted a comment which we have copied here in full:

Hello Tony,You are right about one thing, Reza Aslan did spend a wonderful day with us, at Dror Center, Haifa, Israel, about a month ago.I’m sorry to say, you are wrong about all the rest. And you do manifest bigotry and hatred, based on ignorance. You told me, when we spoke, that you visit Israel occasionally. I invited you to come see us at Dror, even get some free auditing, but you refused to come and “see for yourself.”You ridicule the “indie” Scientologists who are still foolish enough to “believe in LRH” but when you have an opportunity to see what we do, you turn it down.I told you on our last telephone conversation that you too, like other critics, refuse to make the obvious distinction between the scam called the “Church of Scientology” and the subject of Scientology. Miscavige is a lunatic, a despot, the operation he runs is NOT an organization, is NOT a Church and has NOTHING to do with the practice of Scientology.Why would you be annoyed with Reza Aslan deciding to cover the philosophy or religion of Scientology?Why make the false statement that we are: ” a movement that, at its national annual convention, managed to gather about 36 people.” You know this is lie! Fact is, there are many thousands of “indie” and “freezone” Scientologists, actively practicing around the world.I can easily prove to you that we are expanding steadily, not only at Dror, but world-wide.I can also, easily, prove to you that Scientology does deliver “miracles” and “amazing” results. We do so consistently at Dror. You or any of the readers of this blog are warmly invited to come take a look.It pains me that LRH made some grave errors which enabled a lunatic such as Miscavige to seize control and destroy Scientology. Miscavige’s criminality may have killed Karen’s son, the Scientology philosophy definitely did not.When I spent an evening with Karen at her home in July 2013, she still considered herself a Scientologist, we agreed that the Church is NOT Scientology, that Miscvige is a horrendous despot. Karen offered to help us in training on auditing tech of her expertise and gave us one of her e-meters as a present. Maybe she has changed her mind since, which she is entitled to, of course.Marty Rathbun too was an ardent Scientologist when I met him in June 2012, and a few months later became an anti-Scientologist. I still love him and think he’s a great guy, even though we differ on the subject of Scientology.Is Scientology a religion? I think not. But many scholars of the subject disagree with me. Two years ago we hosted, at Dror, Prof James Lewis, an expert on “Modern Religions” who has spent much time studying Scientology. He insisted it falls under the definition of religion, I told him I view it as an “Applied Spiritual Philosophy”. Doesn’t really matter what you call it.Your refusal to differentiate between the Church and the subject of Scientology is what we, Scientologists, call A=A=A. The inability of the reactive mind to see differences. This is also the definition of insanity: viewing as identical, things that are not the same. Like, being afraid of all apples because one apple, years ago, had a worm in it.So maybe you are somewhat obsessive and lack sanity on the subject of Scientology. I am sure you know very well that I am not at all like Miscavige, I am intelligent, truly caring of others, run Dror as a democratic partnership where people from all over the world love to come, and are free to leave. We charge reasonable rates for high-quality services, never compelling a person to donate a dime or take an action he does not wish.Further, you also should know that I am one of the most effective enemies of Miscavige. Possibly even more dangerous to him than you. This point is hard to measure so I say, “possibly”. I am currently suing the Church of Scientology International, as your readers should know, in the Tel Aviv District Court. And, don’t tell anyone, this is still a secret, am helping a few other fellow “indies” in preparing their lawsuits that will soon hit the Church.Scientology is now delivered throughout the world, by hundreds of auditors to thousands of “preclears” with great success. The subject will long outlive criminal operation which is on a rapid decline.If you allow me some additional space on your site, I will be happy to tell your readers more about what we actually do. Those who scorn or mock, do so out of ignorance and I realize, in some cases, due to their suffering at the hands of an evil man, pretending to be a follower of LRH.Thanks for posting this. Best wishes for a wonderful 2016, Dani Lemberger

Following this comment, a long exchange developed on Ortega’s blog. (Note: This is a link to Disqus, a discussion tool used by Ortega’s blog. We are not familiar with it.)

We recently called Dani to find out what made him so furious about Ortega’s post.

AFSI: Dani, in your comment on Ortega’s blog you accuse him of hatred, bigotry and ignorance. How comes?

Dani: Many other readers there have taken this point up. How dare I say that Tony is “ignorant” concerning Scientology. Tony Ortega has established himself as an authority on the subject and I dare state the opposite. There’s a few points to this:

First, if Tony is a journalist, I think he should bring news and opinions of others and remain unbiased. If he has a strong position of hatred and scorn towards Hubbard and Scientology, he loses his position as a fair reporter.

Third, Tony has never had any auditing, has never even visited a decent Scientology center. It so happens his girlfriend is Israeli and he visits Israel occasionally. I invited him to come see Dror Center, inspect it with his own eyes, see what we are doing. He’s never come, says he’s too busy. Strange, if he would have had a genuine and honest approach to the subject, he’d find the time. He’s devoted his life to attacking Scientology, maybe he should take a fresh look at it.

AFSI: Anything else about this specific article, about Reza Aslan’s documentary?

Dani: Yes, it’s just full of lies and twisting of information, that’s what made me mad.

Dani: Let me look… it was a while ago. Here, Tony says:

“But is the “indie” movement really a news story except as a foil to the Church of Scientology itself? If the church did not exist, would anyone care that a tiny group of people think that science fiction writer L. Ron Hubbard was on to something about past lives and superhuman powers?”

This is appalling, sheer bigotry. We are not a “foil” to the Church, have no interest in them, we are thriving unrelated to them. They’re rapidly declining. Nor are we a “tiny group”. There’s thousands of us, worldwide. Tony goes on to say:

“Now CNN,… , is going to use its media power to shine a favorable light on a movement that, at its national annual convention, managed to gather about 36 people.”

He knows his readers trust him so he can knowingly falsify facts. He’s refering to a convention in Reno hosted by Ray Robles. I have never met Ray, we are not part of any “movement” with him. Tony knows this and is belittling us based on a meeting of a few people somewhere.

Yes! Worse yet, Tony, in this article and many others, mocks past lives, the state of Clear and auditing. Who is he working for? What is his agenda? How dare he mock something he knows nothing about?

I have corresponded with Tony, I’ve asked him to let me present what we do to his readers. Nothing. I suggested that an objective scientist come to Dror to research the validity of auditing, the State of Clear, past lives. Never! I’ve invited him to come and look. Nyet. I’ve even offered him some free auditing. Nada. What is he afraid of?

I happen to think that these things, Clear, past lives, are easy to prove as scientific fact. Tony hasn’t looked into it. How can he sneer? And if it’s not a scientific truth but just a “religious belief “, well, most religions believe in the human spirit, reincarnation, etc. So, Scientology is not different from other religions.

Dani: Like I’ve said many times, I do not consider Scientology a religion, because there is too much confusion what does religion constitute. For me, Scientology is an “applied spiritual philosophy”. But auditing, I have no doubt, is an accurate, scientific procedure. It gets consistent, unvarying results. The state of Clear, I think I can prove, is a fact. All pc’s, with auditing only and without suggestion or interference, go past life. Every person can go past life and achieve Clear, even Tony Ortega, if he dares.

AFSI: Thank you for sharing your views with our readers.

Dani: Thank you for listening and publishing.