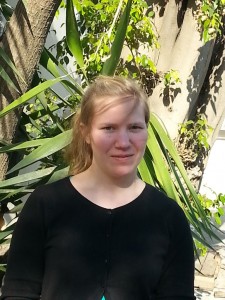 Kjersti Hellesoy is a student at Tromso University, Norway, working on her Masters Degree in Religious Studies. Tromso University is the northernmost university on the planet. Kjersti is currently preparing her thesis on the subject of Independent Scientology, under the guidance of Professor James Lewis.

Prof. Lewis is a world-renown expert on new religious movements and has written much about Scientology. He visited Dror Center a few months ago. You can see the report of his stay and a video of the conference chaired by Prof. Lewis here.

As part of her research, Kjersti spent two weeks in Israel and at Dror Center during January 2014. While here, Kjersti took some services at Dror, interviewed the Dror team and also visited the Tel Aviv Org of the Church of Scientology and met other independent Scientologists such as Don Schaul, Hemi Benvenisti and others.

At the end of her stay we held an interview with Kjersti:

Q: Kjersti, what made you come to Israel and why the focus on Dror Center?

I also wanted to experience personally what auditing is and what Scientology courses are. I did not want my thesis to be purely theoretical. I really wanted to understand why people have an interest in Scientology.

Q: What is your impression of Dror Center?

Kjersti: Dror is a very welcoming place, where the staff is eager to show what it is doing and why they think Scientology is good for people. As a researcher, I was very happy because I could ask any question I had and people were open and friendly to answer.

Q: You mentioned that you got some auditing at Dror, can you tell us more about that?

Kjersti: Yes, I had some hours of what is called “Life Repair”. It was very interesting. It was useful for me to experience myself what auditing is and how it makes you feel. It gave me a better understanding of what Scientology really is. I’ve read a lot about auditing and I’ve heard other people talking about auditing. But to experience it myself gave me a different insight into Scientology and auditing.

I can see why people want to get auditing. It is relieving to talk to somebody else and share your experiences. You are finding out more about yourself.

Q: And what about courses, did you do any?

Kjersti: Yes, I did a course called “Overcoming Ups and Downs in Life”. I realized that it’s a lot of work to be a Scientologist. There are a lot of materials to study. I just did a basic course on the subject of suppression but I know there’s much more to learn about it. The course gave me an interesting angle into the teachings of LRH. I understood that the study of Scientology is gradual. First you learn your basics and then you build your way up. I felt productive by studying and signing off every item of the checksheet.

Q: What other places did you visit in Israel?

Kjersti: I visited Nazareth and I walked in the footsteps of Jesus. There are a lot of things that happened in Israel over the past two thousand years. Everywhere you go in Israel you encounter history and the many religions which have roots here. Israel is sacred to many religions.

It is fascinating to me, having grown in a Christian society, that Haifa which is close to Nazareth, is also the world center for the Baha’i faith and home to a large Scientology community.

Q: Did you visit any other Scientology activities in Israel?

Kjersti: Yes. I visited Don Schaul, an Independent Scientologist in Tel-Aviv. He recently opened a new practice in his home in the center of the city. It was interesting the way he described Scientology to me.

I also visited the Tel-Aviv Org of the Church of Scientology. The Alhambra building seems big and glossy. I didn’t really get a full impression of it as I was there briefly.  The exhibition at the entrance gives you a lot of information about Scientology. It was interesting to see the way they talk about LRH. I noticed there was not much public when I was there. The staff member who met me there was young and kind of slick. I didn’t feel he was interested in me too much. He was just “doing his job”.

Q: Did you notice any difference between Dror and the Tel-Aviv Org?

Kjersti: At Dror there is a pleasant atmosphere. People talk to each other, laugh and seem to have fun. The atmosphere is more nice and cozy. This is not the feeling I had at the Alhambra and other Church Of Scientology orgs I visited.

Interviewer: Kjersti, thank you very much for your time.

Kjersti: Thank you and my appreciation for the guys at Dror, for their hospitality, sharing with me their work and their dedication to what they believe in.